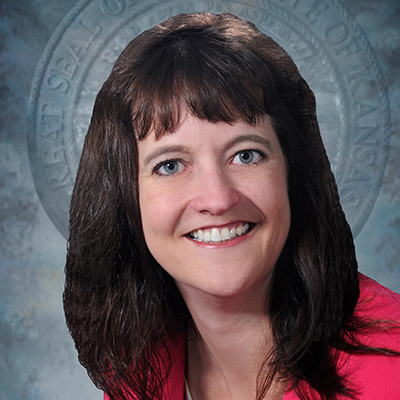 Sarah brings an extensive legal career in the public and private sector to the office of Secretary. She served as Chief Counsel from January 2013 through July 2015 and also held the title of Deputy Secretary since March 2014. She was deputy director for leasing and real estate for the Department of Administration from October 2011 through January 2013. In the private sector, Sarah was vice president and counsel for Silver Lake Bank in Topeka from May 2008 until October 2011. She also was an adjunct faculty member at the Washburn University School of Law from 2011 to 2013. From August 2005 to May 2008 she was associate general counsel for MRV, Inc., in Topeka handling commercial real estate. Sarah graduated from Southwestern College in Winfield in May 1995 and Washburn Law in May 2005 where she was editor of the Washburn Law Journal. She is married to Scott and they have two children. Sarah is a member of the Kansas Bar Association and active in the Girl Scouts.